The Benue State Police Command on Tuesday, paraded suspects arrested for various crimes in the state.

While briefing newsmen at the Command Headquarters in Makurdi, the Commissioner of Police, CP Omololu Bishi, stated that two of the suspects confessed to killing a young man for ritual purpose.

According to the CP, the father of the victim, Mr. Iorumbur Amanger of Tombo-Mbaya Buruku Local Government Area wrote a petition to the Command stating that Hyginus Lubem Mbachi of the same address defrauded him of the sum of Two Hundred and Nine Thousand; One Hundred and Fifty Naira (#209, 150) only being fee for the admission of his son Afa Amanger into a University in Cameroon. The said suspect left his house with his son to Cameroon and since then he could not communicate with his son.

“During investigation Hyginus Lubem Mbachii and one Gambo Bulus alias Murphy of Akwanga, Nasarawa State were arrested at Lafia, Nasarawa State on 22/02/2019 in connection with the case. The suspects confessed to have killed Afa Amanger since 05/01/2019 for ritual purpose and has been collecting money from the complainant for his own personal use”

Corpse of the deceased has been recovered from the Hospital where the suspects earlier abandoned the victim and ran away. The suspect will soon be arraign in Court.

The Command also arrested a gang of armed robbers and kidnappers that invaded the residence of one Hon. Stephen Tsav of North-Bank Area Makurdi in a black Toyota Corolla “Duck Nyash” with the intent to kidnap him. 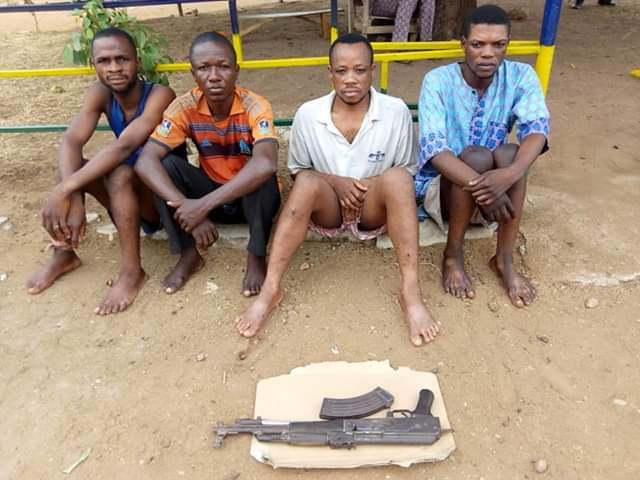 “The victim raised alarm and timely response by the Police patrol team led to the arrest of Joseph Wagh ‘m’ and Terwase Igba ‘m’ both of Daudu Area in Guma Local Government Area of Benue State. Further investigation led to the arrest of other gang members. One Felix Uuma alias “YELLOW”and Danladi Gbanwa alias ‘DANFULANI” and recovery of one (1) Al(47 rifle loaded with (1) life ammunition. The suspects confessed to the crime and will soon be charged to court.

In a similar development, a suspected armed robber was arrested on February 23, during the routine Police patrol within Ugboju town and its environs.

The suspect, Emmanuel Ameh was arrested with one pump action rifle, one locally made revolver pistol, five live cartridges and assorted charms. The suspect who hid himself in the bush near Unwaba Aokwu election Collation Centre Ugboju, Otukpo Local Government Area before his arrest mentioned Charles Ameh, Black Star, Mansion and Chester all  of Otukpo Local Government Area to be members of the same robbery gang. Investigation is still in progress. 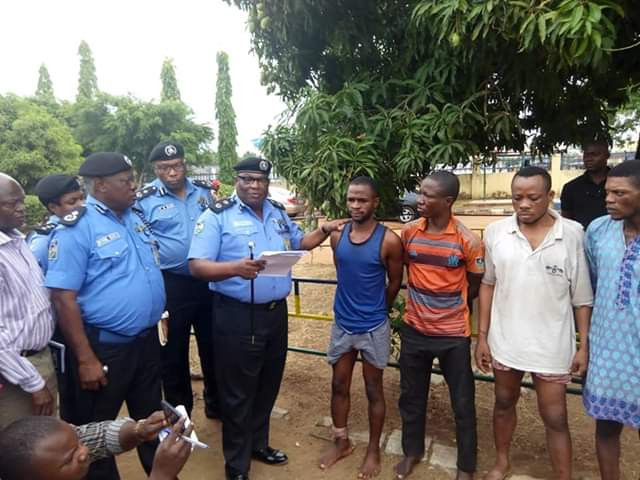 On 24/02/2019 at about 0045hrs one Gbaoren Tsavnande ‘m’of Mbaade village
was arrested in an ash coloured Toyota Corolla “DUCKNYASH” with registration number HK 296′ KJA strategically positioned at Atirkyese Collation Centre with intent to disrupt the election process and rob members of the public of their belongings. The suspect was arrested with one (1) English made GB rifle and one locally made G3 rifle. Effort are being made to arrest other members of the gang at large. 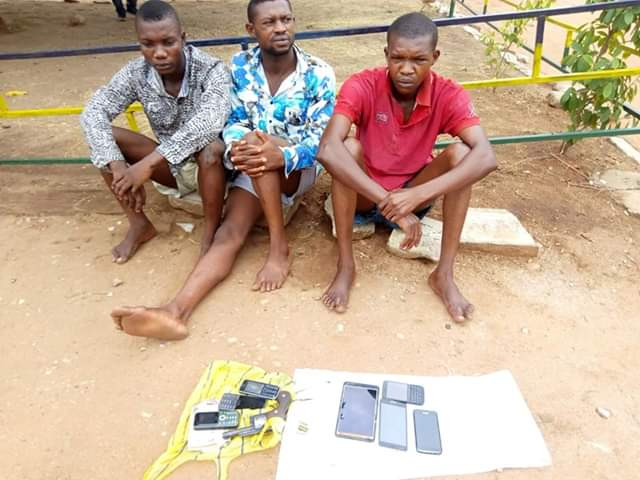 ARREST OF SUSPECTED ARMED ROBBERS CULTIST AND RECOVERY OF ARMS:

On 25/02/2019 at about 0630hrs one Gwebe Joshua ‘m’of behind Bem Hotels, Makurdi made a distress call to inform the police of an armed robbery attack. Prompt response led to the arrest of Richard Terna ‘m’ and Joseph Akaa ‘m’all of North-Bank, Makurdi. Suspects were arrested with one (1) locally made revolver pistol loaded with four (4) rounds of ammunition, four different types of phones and a master key. The gang leader, one Philp is at large. The suspects confessed to be members of Black Axe and Blue Mate Confraternity, some of the phones recovered have been identified by their respective owners. One Aka Chukwu ‘m’ of North-Bank Makurdi have been arrested as a receiver of stolen phones. Suspects will soon be charged to Court.

The Confederation of African Football (CAF) Referees’ Appointment Committee has confirmed the appointment of Bakary...

Senate of the Ladoke Akintola University of Technology (LAUTECH), Ogbomoso, Oyo State has approved the...

It was drama Tuesday at the Ikeja Government Reservation Area (GRA) Headquarters of the Lagos...