A Nigerian lawyer who married her ex after a very short courtship has told of how her marriage ended up being a nightmare that she had to escape from. Kylie Joy Terundu said she had known her husband for only 3 months before they decided to get married. But while in the marriage, she realized it was different from her expectations and she had to make a life-changing decision.

She eventually decided to leave the marriage even though the union had already produced daughters.

She said she never believed she would end up a single mother but she’s glad she made the decision to divorce her husband and start all over.

Isn’t it crazy yet wonderful how unscripted life can be?
I mean look at me, if anyone had told me that I would one day be a single mother, I wouldn’t have believed them.
I always thought that I would grow old with the one man that I marry; it’s what I wanted, it’s what I grew up witnessing.
My parents have been together for 31 years. Though imperfect, I watched my father treat my mother with so much love and respect.
They liked eachother’s company and I never witnessed dad being cruel to mum.
He was always supporting her even when we all knew that she has messed up.
It was so beautiful to watch (it still is) and I wanted the same for myself.

But, when I got married to the man I met only three Months after “knowing” him (long distance), this dream of mine was not to hold.
I tried to make it work, we both did but in the end, I was so miserable (we both were). We were incompatible to say the least and when two persons who have completely different views about life, beliefs and dreams come to live together, the result is chaos.
I wasn’t going to cross over; that would have meant losing myself and everything that I believed in. He wasn’t going to cross either –
I was then faced with two options:

1. To accept that situation and spend the rest of life wondering what might have been if I had married the man who shared my dreams, ideas, hopes and beliefs.
The man who spoke tenderly to me, who saw my soul for what it is, who wanted to take long walks together, play board games, enjoy reading my works and think that I am the most incredible being ever whom he cannot imagine a life without
OR
2. Leave and avail myself for the life that I desire.

I chose the latter because forever I decided, is too long a time to stay unhappy.
It’s being great out here.
I’m at peace.
My chest doesn’t hurt anymore and I do not dread each passing day.

I’m surrounded with the love and support of family and a few good friends.
I’m able to further my life and pursue all the things I’ve always desired to do.

Being a single mother has been awesome too, I carry my status with pride, because it really is nothing to feel ashamed about, if anything, I am proud of myself for having the courage to do all that I have done.
You should see me screening toasters ?, that’s because I am not willing to settle for just any man.
I know what I want and it’s what I would have and give myself to.
As for our girls, they would continue to know that daddy loves them.
What happened between us is between us, the kids should not have to suffer for it nor witness it at all, because when parents fight, the children bleed and I would not do that to our girls.
Daddy loves them and they should have a great relationship.
I am very hopeful about the future.
I hope that he finds his happy (if it hasn’t happened yet) and I hope that we can be reasonable co-parents (because we would marry other people) who can sit down together and even take trips for the sake of our beautiful girls.
It’s a great life.
I made the best desicion I could have made.
#singlemom

Meanwhile below is a comment from an Instagram user who already analyzed the problem of the poster’s marriage from the little narration he read, and came up with a diagnosis. 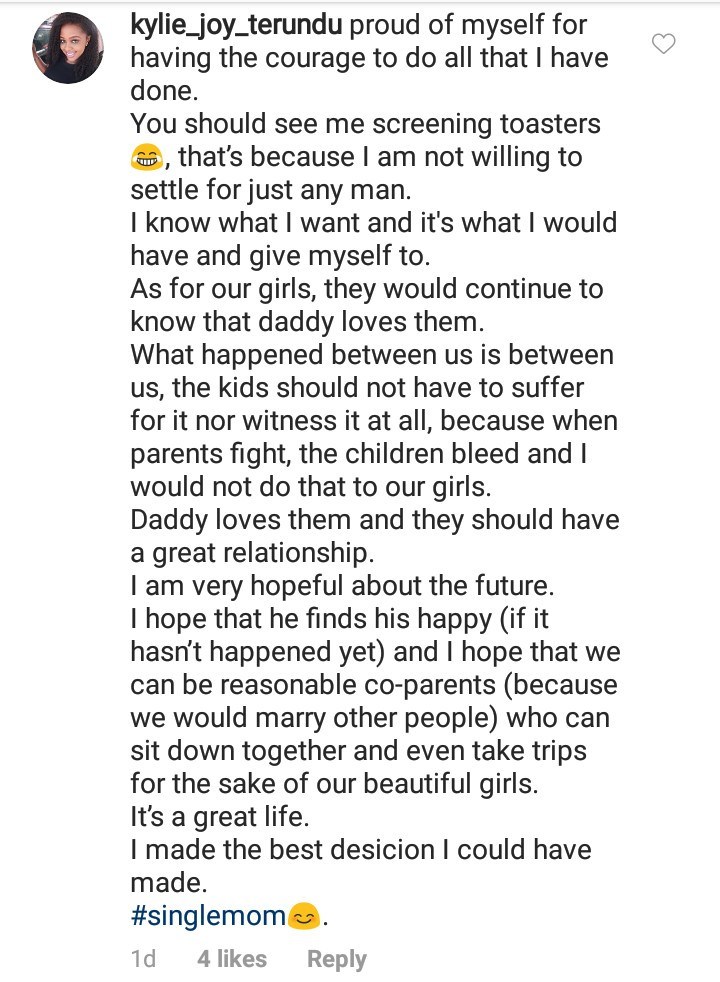 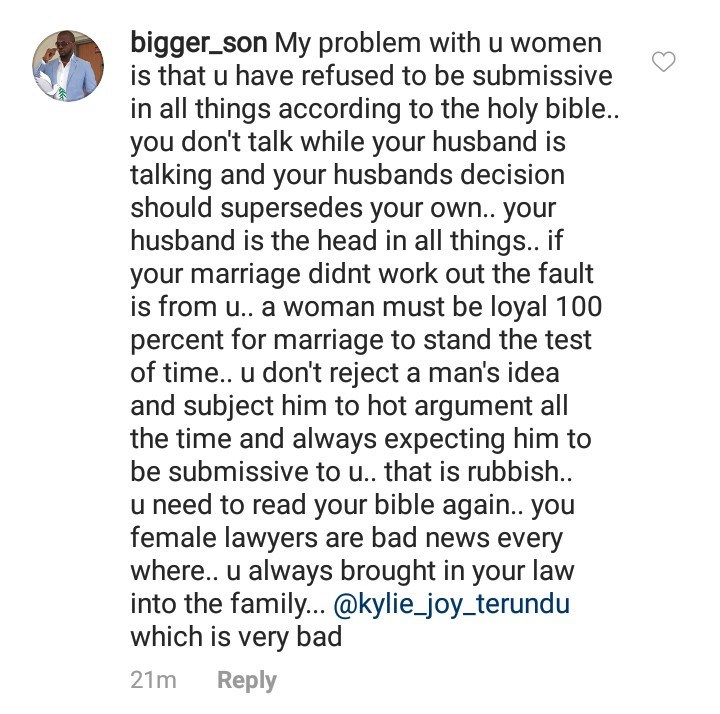 Nigerian Afro-Pop singer, Burna Boy is really living his best life at the moment as...

The United States and China have announced a ceasefire in their tariffs war, hours after...

Nigeria international forward Victor Osimhen has joined Lille from Belgian side Charleroi on a five-year...